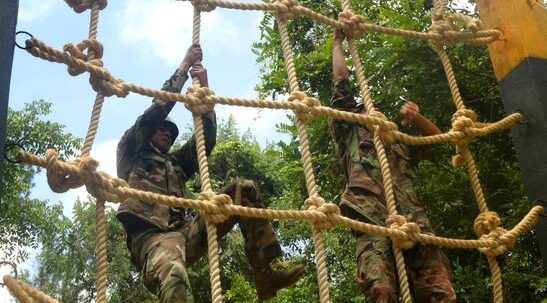 It’s 1987 or 1988. I’m in the last year of attending primary school in a small Mid-Wales village. My school has an English language and a Welsh language section. In a school with only five teachers, most activities from the playground to the school play involve all of us, irrespective of language.

We’re on a school trip to an army assault course, designed for training soldiers. We’re allowed to have a go. One of the other children on the trip gets up to the top of a climbing section and then makes the mistake of looking down. He freezes, he panics and then he gets upset.

The army people supervising us try to help. There is a lot of talking – in English – but he’s getting more distressed. Those of us on the ground are worried, too. The headmaster spots the situation and runs across. A few sentences in Welsh, and everything is back under control.

In Wales, we have two languages – Welsh and English – with equal legal status. My example is far from the only time that I have seen someone start to interact in a language that would not usually present a problem to them but where it has done, suddenly and unexpectedly. Language is complex. It’s easy to see it as a binary choice, or an academic ability, but it’s more than that. Ability or fluency can vary both temporarily and permanently, it can come with different amounts of cognitive load in different situations, and the language – and even type of language – you’re interacting in can impact your attitude towards the service you’re using, or the organisation providing the service.

The reductive – and can I go so far as to say quasi-colonial? – approach of reducing language to a single choice and describing all other options as additional and unnecessarily complex is tempting. As with any other attempt to bludgeon optimising for the common cause into a mono-focused solution, it’s not reality. Language is a part of our lives, whether we like it or not. Wikipedia quotes a 2006 EU study that suggests over a third of us in the UK can speak a second language. The 2021 Census for England and Wales supplied support in 50 languages.

The more globalised we become, the more important an ability to handle language on an equal status becomes. Language may be a competitive advantage rather than a hindrance in the digital world if it introduces us to the complexity that many users face on a daily basis.

In my career, I’ve been responsible for delivering software, video, audio, transactional digital services and web and social media content in the languages of Welsh and English. My experience has run the gamut from working in an office where Welsh was the default language to working on a web programme where the head of the programme described Welsh as “a dead language for stupid people”. I’ve had to stop translators from translating a major UK site a-z with 26 character navigation into Welsh, because Welsh has a 29 character alphabet, I’ve had to hand-code modifications to source code to remove hard-coded English menu options at the last minute before launch, I’ve subtitled Welsh language video clips into English (and vice-versa), I’ve run user research on language options, I’ve created shared language glossaries, and I’ve managed formal conversations between the Welsh Language Board [1] and government agencies.

Almost all of the discussions that I’ve had about language in service design have been about what we should do: should we provide a service or a website or a piece of software in that language? Should it be fully or partially provided? Does it meet the commitments made in the organisational Welsh Language Scheme (which, in some cases, were written before the existence of smartphones but still apply)?

I want to suggest that what we have to do according to laws and standards is a bad place to start a conversation about user centred service design. Not least because starting here means that you often run into a conversational cul-de-sac where someone asks “well, who’s going to make us?”. As anyone who has grappled with digital accessibility will tell you, the moment you start designing to achieve minimum adherence to regulation through tick boxes rather than best adherence through research is the moment that everything shifts away from the user.

The last ten years have seen some dramatic shifts in the way that we create services. A decade ago, you could probably justify paying a branding agency to create a Photoshop mock-up that was then chopped up and recreated digitally in first one language, then signed off, and a translated equivalent produced. What about now, when an iterative, user-centred approach to service design means that change is no longer constrained to a launch ceremony once every five years but actually happens continuously?

The paradigm has changed but how do we manage that in multiple language contexts? My suggestion is that we should stop talking about what we should do and start talking about how we design in the languages of Welsh and English. To start the conversation, I’ve come up with a few suggestions for how we might do this. Whilst this started as a single post, I would be trespassing on the generosity of readers to leave it that way so I’ll be publishing them daily as individual blog posts over the next few weeks. My specific experience is with bilingual service design in the languages of Welsh and English, but I hope that what I say is also relevant in the context of service design in other languages as well. (If it doesn’t, then there’s a risk I’m not making sense.)

[1] As was – now replaced by the Welsh Language Commissioner

Five ways to get the most from discovery work

Why we should stop talking about Assisted Digital